skip to main | skip to sidebar

2011 was the year I travelled to some new places. After not travelling for so long, when it's in your blood, you really feel like something is missing! Also it's a great way of building up stock photos to submit to libraries, to sell or to exhibit!

In April I photographed a hen weekend in Liverpool. After the hen and party had left, I spend most of the day ambling around the city with my camera and came up with these photos here:

Prior to meeting up with the hen party I spent a couple of hours in Chester as I had to change trains. If you ever have the opportunity to change trains and explore somewhere new, I definitely recommend it. It had been a long time since I had been to Chester and was fascinated by the Tudor architecture.

In April I photographed a wedding in a castle in Derbyshire. My first pagan wedding with hand tying ceremony. There was a owl and falconry display too before we moved on to the reception venue!

In July, I photographed a wedding in Estonia. Being there for 5 days meant I was able to explore Tallinn to some extent. Tallinn is a medieval town full of interesting architecture and ironmongery! More photos to be added to the Estonia flickr album soon.
In September I went on a Metaphysical Art Retreat to Santorini. As well as photographing amazing sunsets, blue skies and beautiful white churches, I spent 24 hours of teachings indoors. I took a ferry from Santorini Island into Piraeus, Athens and spent 3 nights in Athens where I photographed the Acropolis and Temple of Zeus as well as more recent buildings too! More photos here:
In the past, I have photographed weddings in Sorrento, Thailand and Florida as well as doing commercial shoots in Morocco and other places too. I love travelling and look forward to doing more in the future.

Posted by PixelVixenUK at 01:17 No comments: Links to this post

October was a busy month for me. I also took part in the Pedder sponsored Photography exhibition at Bigger Picture Gallery Crystal Palace, London, in October 2010.

I submitted my Blue Lights image which was accepted into the exhibition :)

Posted by PixelVixenUK at 00:17 No comments: Links to this post

In may 2011, I exhibited some photos in a new gallery/empty shop initiative in Orpington, Kent. My photos on show were Covent Garden 1 and Toast 1 - both are part of a series I shot on film in 2002.
The technique is as follows: I shot on slide film E6 and developed in C41 print chemicals. It is trial and error to get the desired effect but chemicals and film react differently in some situations and so you really don't know the exact effect you are going to achieve! Colours are intensified and highlights bleached out! With the right subject, it can produce stunning effects such as these.
The shop gallery was home to various local artists in all different mediums. Situated in a busy shopping centre, there was almost something for everyone! 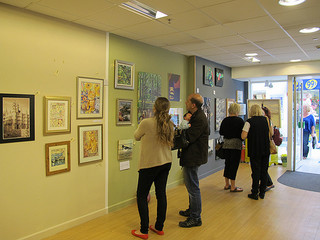 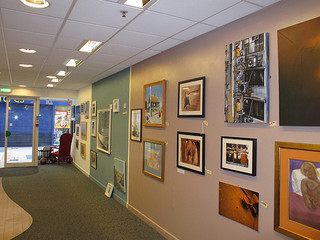 To see more pix from the store on the opening day see the album on Flickr
Posted by PixelVixenUK at 02:27 No comments: Links to this post

Working with Patrick Lyons and PH7 Radio, I exhibited my Mine's a Pint series in the Old Police Station in Deptford, London.

This was a pop up exhibition for one night only to correspond with a musical showcase and exhibition by other artists in the old police cells!

I exhibited in the main room where there was a DJ and bar and people generally milling around, sitting, dancing etc. There was no long empty wall to hang my pictures - instead they were dotted around the room which worked really well. I also stuck used bingo tickets to the window to add to the ambience. It was a good experience to do a one-nighter with the actual framed photos. The audience enjoyed the exhibition as it complemented the environment and the other artistic acts.
All images copyright Tracy Howl, all rights reserved.
Posted by PixelVixenUK at 02:04 No comments: Links to this post

On the London Fringe Festival I met and worked with some very talented people including Patrick Lyons of PH7 Radio, who organised the London New Music Award.

The winners of this Award were the New Cut Gang, a very talented band writing and performing their own music. Excellent live too!

The whole purpose of the Award was to find, guide and nurture new talent with the goal of getting them 'signed'  and on their way up the ladder! The music business is hard to get into and therefore with someone like Patrick and his experience and connections, the New Cut Gang, have a chance of success! But it's a lot of hard work, rehearsing, playing gigs - it's all practice!

I went along to one of their rehearsal sessions in PH7 studios in East London. Here are some of the photos taken there..... 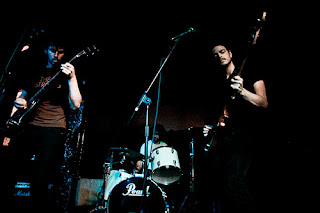 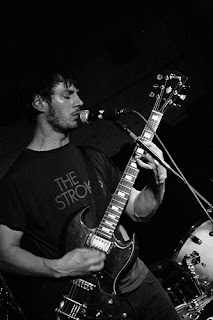 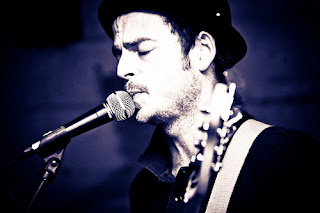 Proud Camden is a fabulous venue set in the Famous Stables Market of Camden Town with the original stables intact and used as a feature. Horseplay is an event which runs once a month in the stables. A fabulous name don't you think? The organisers of Horseplay invites artists of all mediums, be it actual 2D artists, installation artists or performance artists to take over a stable for the evening and make an interactive art piece whatever it is!

I had been to a couple of events there and was amazed and very entertained by the different artists on show! I joined in a silent tea dance, watched a maypole dance with ribbons by delicately painted dancers, a band performing on a pole dance podium and a short film.

This inspired me to take on not just one but 2 stables for one evening in August. I wanted to create a divide between men and women but also integrate them fully as a performance piece. I have a dance/performance background and have also created installations so the following idea came to me. I created a very girlie pink room called 'Georgia's Party' and a very manly room called 'Mine's A Pint' based on my previous projects.

Stable 1: Georgia's Party was decorated in streamers and balloons with a birthday theme in mind. Photos of birthday parties were stuck on the wall too. A video from the original 'Georgia's Party installation was played on a wall mounted flat screen TV. There were little cakes and nibbles just as you would get at a child's birthday party. It was actually my friend's birthday and so she was 'The Birthday Girl!' and sat on a special throne in the room! We played games such as 'musical statues' and 'musical bumps' and played 'pass the parcel' which went down a treat. As this was a girl's room, men were only allowed in if they wore a pink party hat!

Stable 2: Mine's a Pint was decorated with photographic stills of working men's clubs, a project I have spent 12 years on. I also stuck used bingo tickets and raffle tickets over the walls to add to the ambience. I showed a video I had taken in one working men's club on another wall mounted flat screen TV. On the central table, I had unused bingo tickets and bingo dabbers ( which create big round dots to mark off your numbers!) and a children's toy bingo machine. People were invited to play a game of bingo. As this was a man's room, women were only allowed in they wore a fake paper moustache attached to a straw!

I wanted to emphasise the role play of each gender and it worked really well. It was hard work performing 2 pieces but they complemented each other perfectly as a pair!

Posted by PixelVixenUK at 01:25 No comments: Links to this post

I exhibited my Mine's a Pint exhibition in Photolounge at the Truman Brewery, East London as part of Photomonth in October 2010. 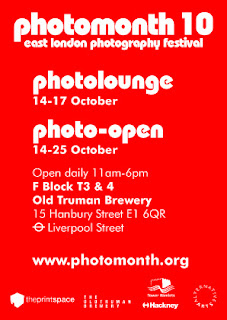 I was unsure at first what to exhibit but then I thought 'Mine's a Pint' at the Truman Brewery had a certain ring to it! Once it clicked, it definitely made sense! The narrative theme is Working Men's Clubs and beer is an important part of them!

The original Mine's a Pint series consists of 12 frames each landscape, 40 x 50 cm. I kept the same layout and order as I did when I first showed this work at my Degree Show at Westbourne Studios in 2003.(See below).

The space was amazing, a huge redundant warehouse just off Brick Lane in London's trendy East End. An area full of vibrancy, creativity and amazing Asian restaurants. And because I was involved from the start, I was able to choose my exhibition space.  I chose a wall between 2 windows which was in perfect view as you came through the main door. Location is everything! One must think how the viewer thinks and acts in order to make the most of exhibiting. After all, the viewer is the reason behind an exhibition! And you want them to see your work and not walk straight past it!
The exhibition ran from Thursday to Sunday with the private view on Thursday evening. This was a huge success with hundreds of people coming and viewing the exhibition. Photobox were exhibiting in the next room with a giant book which was very different!


Posted by PixelVixenUK at 00:49 No comments: Links to this post